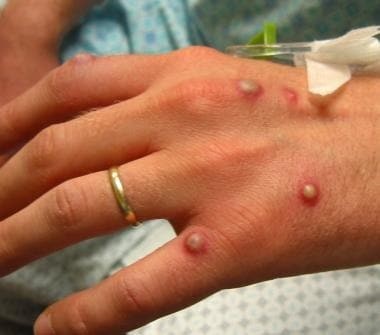 Monkeypox is a rare viral disease that was first discovered in monkeys and other nonhuman primates (NHP) in 1958. In humans, monkeypox appears as a skin rash illness that is accompanied by fever, swollen lymph nodes, chills, and fatigue. It may also cause complications such as pneumonia or encephalitis.

Like all poxviruses, monkeypox spreads from person to person through contact with body fluids from infected persons or animals – most commonly saliva and respiratory secretions. (CDC) There are two strains of monkeypox: one can be fatal and one can be uncomfortable but not particularly dangerous. The latter kind is what’s currently circulating in Illinois.

Monkeypox, also known as Human Monkeypox, can be found in central and western Africa, and it’s highly contagious among humans who come into contact with the virus. However, you can avoid getting this potentially fatal disease by following these 5 ways to prevent monkeypox.

Not all pets carry monkeypox, but it’s a good idea to handle animals with caution, especially when traveling or if you live in an area where animal contact may be common. Put on a pair of latex gloves before handling an animal and don’t touch your face until you’ve washed your hands thoroughly. Always wash your hands before eating and don’t let children under age 5 play with pets that could have been exposed; it only takes one scratch from a pet who has contracted monkeypox for your child to become ill.

Avoid contact with animals that could carry monkeypox. The virus is transmitted from animals to humans through close contacts, such as a bite or scratch. Avoid areas where animals are present, including farms and wooded areas. If you come into contact with an animal in a zoo or other controlled environment, make sure you avoid direct physical contact while wearing gloves and using hand sanitizer.

If possible, wash your hands immediately after touching any potentially infected animal; if soap and water aren’t available, use a sanitizing wipe or solution. Remember that no amount of sanitizer can get rid of potential monkeypox contamination on your skin so it’s best not to risk it in the first place!

Since monkeypox is spread through contact with bodily fluids, it’s important to wash your hands often with soap and water. That simple act can help protect you from getting sick. If possible, avoid touching your mouth, nose, and eyes because these are all entry points for harmful germs.

And keep in mind that monkeys aren’t the only animals who can carry monkeypox-causing viruses; rodents, dogs, and cats also can harbor them (which means those animals should be vaccinated against other pox-like viruses). Although people in close contact with infected persons may become ill too (during a respiratory outbreak), they will likely experience a much milder illness.

Don’t handle items that may have been contaminated

While poxviruses like monkeypox don’t spread through contact with an infected person, they are easily spread through contact with items that were exposed to an infected individual. To prevent monkeypox, take simple steps such as washing your hands after handling common objects and not picking up things in places where it may be difficult to see if they’ve been touched by others.

You should also avoid touching your mouth or nose before washing your hands. Poxviruses are rarely spread by close physical contact between people, but because of their relatively long incubation period (between one and three weeks), people can become carriers of a pox virus without even realizing it themselves. Don’t panic!

Stay away from anyone who is infected

If you are in a group that is at risk of getting monkeypox, it’s important that you stay away from people who might be infected. If there are outbreaks happening where you live, know where local hospitals and health care centers are so that if someone in your area has contracted monkeypox, you can get treatment as quickly as possible.

If you want to travel somewhere where there is an outbreak, make sure your vaccinations are up-to-date. Check with your doctor before going anywhere near any kind of outbreak. It’s not worth risking your health just to see something cool; it could be a long time before you have a chance like that again.

Read more: What is Love?

8 thoughts on “5 Ways to Prevent Monkeypox”